st tropez is a hot spot for celebrities

October 12, 2017 · by Quality Villas
The town of St Tropez on the French Riviera was just a normal fishing village at the beginning of the 20th century, but after the Second World War, it became known internationally as a seaside resort, principally due to the influx of artists associated with French New Wave. Today it continues to attract the rich and famous, and throughout the year, you are sure to spot some well-known celebrities in the town while staying at our luxury St Tropez villas.
One of the first to put St Tropez on the map was Brigitte Bardot. The French actress starred in the film And God Created Woman in the 1950s, which was set in the town. The film generated huge interest for tourists and other artists and was transformed from a sleepy fishing village to a glamorous Riviera getaway. In fact, the town has honoured the influence Bardot has had with a statue of her, located near the film museum in St Tropez.
But why is St Tropez such a celebrity hotspot?
Many artists, fashion icons and actors have been drawn to the town over the years, even more so than nearby Cannes that holds the prestigious film festival.
St Tropez is beautiful and glamorous, with many cool bars and restaurants. Places such as LOpèra offers views of the port and bell tower for diners, and the décor includes artwork from photographers such as Philippe Shangti as part of the modern setting. It truly comes alive at night, with live dancers and performers. On the opposite side of the port is Le Quai, a lounge bar offering chic cocktails in the piano bar, and French and Asian fusion cuisine in the restaurants. At night, there is entertainment in the form of dancers and DJs.
Along with the many restaurants and bars, St Tropez also has several nightclubs that attract the celebrities. The VIP Room is among the elite often seen as THE club to be seen in on the Cote dAzur. It is popular with celebrities like Rihanna, Beyoncé and Jay-Z, and also offers Mediterranean cuisine for any diners and regular exhibitions. Check out the wall of fame at the club, showcasing all the famous faces that have passed through its doors. Another night-time hotspot is Gaio restaurant and nightclub. Formerly known as Papagayo, it is the towns oldest nightclub venue that attracted icons such as Brigitte Bardot and Mick Jagger. As a restaurant and club it gives you the chance to dine on superb food before partying.
One of the most famous nightclubs in France, Les Caves du Roy, is in St Tropez. It has maintained a recognisable style over the years; baroque columns that tower above VIP booths with oriental touches throughout. The club is popular with celebrities like P-Diddy and Beyoncé and is definitely one the best place to be seen in St Tropez and see celebrities.
In addition to the bars, restaurants and nightclubs that the town has, there is also the yachts in the harbour. Owners moor their grand luxury yachts and sailing boats in the marina, and there is a chance you can spot celebrities bathing and partying on the huge boats. Though access to these marinas is limited, you may still spot people when sipping on coffee at cafes surrounding the marinas. 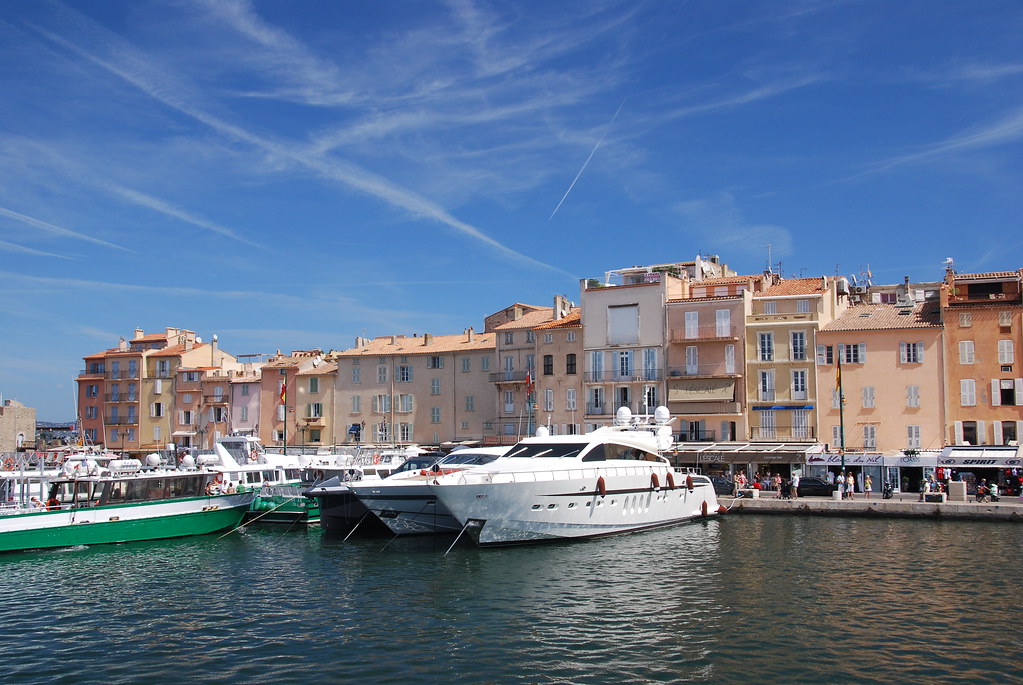 Which celebrities might you see?
While summer is the best time of year to see celebrities dining out or partying, they do pop up throughout the year, making the most of St Tropez year-long sun. The town has attracted the famous from all industries; fashion, film and music.
The Kardashians are celebrities that have become a household name due to their reality show, and it is likely you might see the matriarch of the celeb family Kris Jenner along with one of her daughters sipping water or champagne on a yacht.
Some of the musicians you may see walking the streets of St Tropez or in one of the many bars and clubs include Bono, Noel Gallagher, Elton John, Sting and those mentioned before  Rihanna, Beyoncé and Jay-Z. The latter two are big fans of the French Riviera and specifically St Tropez. Dont be surprised to see the music royalty with their children hitting the streets of the town when you are there in the summer.
It is not just those from the music industry who frequent the hotspots of St Tropez, as it has attracted many fashion elite such as the supermodels Kate Moss, Naomi Campbell and Cindy Crawford and the fashion designers Giorgio Armani and Karl Lagerfeld.
Then there are the Hollywood stars who have holidayed in the French Riviera for years including Leonardo DiCaprio, Jennifer Anniston, Johnny Depp and Angelia Jolie. You may be able to see them sunning on luxury yachts or dining out at boutique cafes and the towns best restaurants.
Have you ever had a celebrity sighting on holiday to St Tropez? Or would you like to rub shoulders with the rich and famous on a luxury break yourself? Get in touch with Quality Villas today!